1
CEREMONY MALOCA
Our facilities are conditioned to give you better care.
Click Here
SHAMAN MASTERS
Our shaman masters inherited the wisdom of their ancestors.
Click Here
INTERPRETATION OF VISIONS
After the ceremonies our shamans will interpret their visions.
Click Here
Previous
Next

We are from the KUKAMA KUKAMIRIA ethnic group and we invite you to give us the opportunity to guide you and guide you with our acquired knowledge.

Ayahuasca is a traditional drink indigenous to the Amazonian peoples of the tropical and subtropical areas of South America. The drink has a long history of use within traditional medicine.
It is a decoction made from the combination of:
• Banisteriopsis caapi (yagé or ayahuasca), which contains harmine and tetrahydroharmine (THH), alkaloids of the beta-carboline class, which act as monoamine oxidase (IMAO) inhibitors. ) and that allow the primary psychoactive component dimethyltryptamine (DMT) to become active; and a second plant that is the one that has the DMT itself, especially Psychotria viridis, also known as chacruna; or also Diplopterys cabrerana, known as chagropanga or chaliponga (in the case of the preparation known as yagé).
The consumption of ayahuasca can generate hallucinogenic effects due to the presence of natural DMT from plants such as Psychotria viridis, Diplopterys cabrerana and others. The result of said cooking has several names according to the different towns that prepare them.
• Ayahuasca in Quechua means ‘rope of the spirits’ by its etymology aya (spirit, dead) and waska (rope, rope), 3 since in the worldview of native peoples ayahuasca is the rope, which allows the spirit to come out of the body without it dying. This word is used in Peru, Bolivia and parts of Ecuador.
• Yagé is a Cofán word (it is also found in other sources written as yajé), and is used by indigenous people of the Colombian Amazon and Andes, Ecuadorians and in Peruvian regions near the borders of these two countries.
It is a decoction of the liana Banisteriopsis caapi, but there are other plants that also contain similar substances, such as Colaoriopsis caapi or Peganum harmala (Syrian rue), so they can be used instead of liana, which will give the various ayahuascas great variability in their chemical composition , physical response and psychic effect
Liana Banisteriopsis caapi contains substances known as harmala alkaloids. The main ones are harmine (an active ingredient that before its official classification in 1939 was called banisterin, yagein), and in low concentrations it also contains harmaline and harmalol. This group of β-carboline alkaloids is not exclusive to Banisteriopsis species, it also occurs in the seeds of Peganum harmala or Syrian rue.

One of the most common preparations is the mixture of Banisteriosis caapi with Psychotria viridis, chacruna in one of its native names. It can also be found mixed with Diplopterys cabrerana or chacopranga, or with Mimosa hostilis. These plants would provide the preparation, where appropriate, the molecule dimethyltryptamine or DMT. However, the variability in the composition of the various ayahuascas will be very large, with some additional components such as tobacco or other plants being found in some of its variants. The result is a concoction used in the shamanic rituals of various native Amazonian peoples. 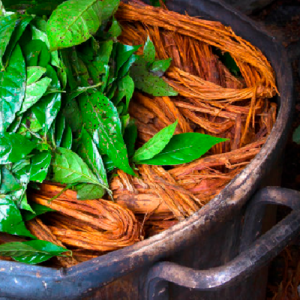 The toxicity of ayahuasca is low and there is no risk of habituation, but its consumption is not without risks, both due to the side effects of the combination of its active ingredients, as well as its hallucinogenic effect, or the lack of control over those who prepare and spread it outside the places where its use is traditional.
The most frequent side effects are nausea, vomiting, diarrhea, mydriasis, ataxia, sweating or tremor. Other less common effects are hypertension and palpitations.

Ayahuasca has an ancient origin among the Amazon cultures of Peru, Venezuela, Colombia, Bolivia, Ecuador and Brazil. Various cultures and traditions of the Amazonian peoples understood the ayahuasca potion from the traditional paradigm of health typical of these peoples.

Ancestral medicine of more than 1,000 years, the community of the KAXINAHUA (distribution between Peru-Brazil) there is a story that deals with the Kampu medicine man, feeling very worried because in his town many people died and that is why I invoke that concern to the great spirit and this showed him the great teaching through visions, the great spirit took a frog in his hand from which he took a white secretion and taught KAMPU how to apply medicine, after the vision he returned to his people and followed the instructions, so the Shaman KAMPU was able to heal all the people of his town, after his death from KAMPU the villagers believe that his spirit has begun to live in the frog.

It is a fire medicine, when it is combined with the water that is drunk before the treatment, an ALCHEMICAL transformation occurs and the old toxins are released through vomiting or defecation, this cleaning process not only works on a physical level, but also a spiritual one .

The Kambo by connecting with our natural wisdom reflects our negative habits.

It shows us what we should avoid and what we can do to improve, it gives us the energy that we normally do not have but that we need for our spiritual path, removing the cloud of PANEMA AROUND OUR ENERGETIC FIELD, we become more open to receive from the spirit.

It is used by the natives as a vaccine to protect themselves from diseases and bad luck as a form of regeneration to increase the vision and ability to hunt and prevent animal bites.

Among the dozens of PEPTICES found in the Kambo about 7% are BIOACTIVE, so far researchers have found 9 Bioactive PEPTIDES that have a powerful effect on gastrointestinal muscles, gastric and pancreatic secretions, blood circulation and in stimulating the adrenal cortex and the pituitary glands.

It is the strongest natural antibiotic and anesthetic in the world and boosts the immune system, the properties of the Kambo peptides cover a wide range of possible medical uses in diseases such as ALZHEIMER AND PARKINSON, DEPRESSION, MIGRAINE, BLOOD CIRCULATION PROBLEMS, VASCULAR INSUFFICIENCY, ORGAN DISEASES, EYE AND SKIN PROBLEMS, FERTILITY PROBLEMS IN WOMEN AND MEN, HIV / AIDS, HEPATITIS AND CANCER.

Those who get this vaccine often don’t get sick and have a lot of energy.

It also aligns the CHAKRAS and cleans the auric field, brings the heart to its natural rhythm, it is the most powerful natural medicine in the Amazon which contains the 4 elements. 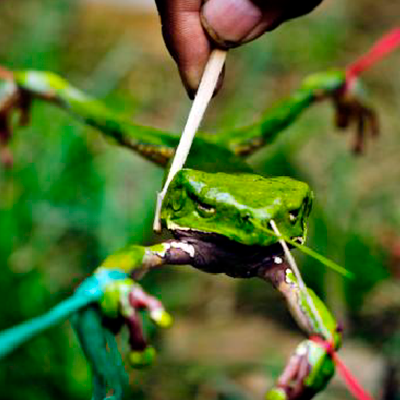 For the Noke Kuin of Acre, the secretion of the kambó frog is part of their remedies along with the oni (ayahuasca), rome (tobacco) and the rome poto (tobacco with ash from a native tree). It is used first as a stimulant for hunters and then for people with tikish or laziness and good blood circulation.

The ritual should be performed at the beginning of the morning or before dawn and the person to whom the kambo will be applied must drink a large amount of caiçuma: a drink based on cassava (Manihot esculenta) without fermentation, and in the in case it cannot be obtained, water. Before application, the skin is burned superficially with a twig or titica from a vine, leaving a certain number of points. On these points the frog secretion previously hydrated with water or saliva will be applied. Bathing is recommended to suspend the undesirable effects provided by the application. For hunting use with the aim of sharpening the senses, the points are applied linearly.

They go up until they reach the shoulder and go through the chest until they reach the navel. From there they climb up to the other wrist. Before this, it is important that the future hunter chooses the person who will apply the kambo to him well as this will have an impact on the success of the hunt: if there is a good hunt, the hunter will return to look for his applicator, perhaps for the entire lifetime.

In propitiatory rituals such as the Matsés and Yaminawa in Peru, and the Mayorunas in Brazil, the secretion is mixed with saliva or water, and is applied to the newly opened small wounds generated by burns on the arms or chest.28 This immediately generates a state of discomfort that includes the sensation of burning, tachycardia, dizziness, bile discharge, vomiting, and urinary and fecal incontinence for about 15 minutes, followed by a period of calm and finally euphoria.11 The symptoms generated are complex and they are due to a pharmacological reaction to neuropeptides that are likely to act synergistically.

The kambó ritual is absolutely contraindicated for pregnant women, lactating mothers and for people with cardiovascular problems, chronic hypotension, Shy-Drager syndrome, the elderly, and / or in a fragile state of health. Also for people with certain psychological conditions such as borderline personality disorder, dissociative disorders, bipolar disorder, severe depression and other diseases where psychosis can manifest.

The use of kambó in combination with ayahuasca, jurema, iboga or other entheogens in the same session is also not recommended. It is recommended to drink water before the ritual and to verify the experience and skills of the person who administers the kambó.

Additionally, the Kambô International Association of Practitioners (IAKP) specifically excludes people with pacemakers, who have had cardiac arrest, cerebral hemorrhage, thrombosis or aneurysm, in the process of recovering from major surgery, who are receiving chemotherapy or radiotherapy (or have received it in the last four weeks), are taking immunosuppressants after an organ transplant operation, with Addison’s disease, epilepsy, certain types of Ehlers-Danlos syndrome and those who do not have the mental ability to decide to take kambó by themselves.

Commonly called San Pedro cactus. It is used in traditional Andean medicine for both human and veterinary use and is widely cultivated as an ornamental plant.
It has a long tradition in traditional Andean medicine, especially in the northern table tradition.
Currently it is widely known and used to treat nerve, joint, drug addiction, heart disease and hypertension conditions, it also has antimicrobial properties.
After peyote, San Pedro is the one with the highest concentration of mescaline. 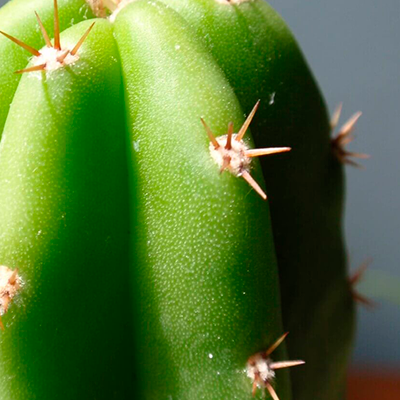